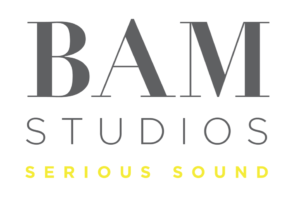 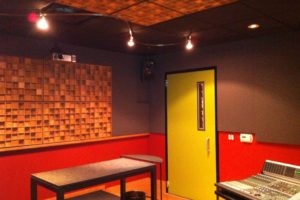 BAM Studio / Chicago is one of the nation’s top premier post-production and voice over recording studios specializing in television, radio and digital productions.

O’Neill Engineered Systems, Inc. was brought in to design and provide unique doors, windows, fabric panels, duct silencers, underlayment and other isolation materials for the new Studio B.

Acoustically isolate a voice-over recording studio from the myriad of invasive building noises, HVAC and mechanical noise as well as structure-borne vibration located within a busy urban office tower.

A double-stud wall recording booth with floating floor was built using a two-piece decoupled acoustic window system and an STC-53 door to isolate the room from the rest of the building.

The booth’s interior walls and ceiling were lined with 2” Thick, fabric wrapped panels and featured a corner bass trap and HVAC duct silencer.

The resulting booth design and execution virtually eliminated background frequencies and sound contamination resulting in perfect post production voice-over recordings for some of the highest quality productions including Chicago PD and Chicago Fire for NBC Universal as well as other productions for FOX, DreamWorks, Disney and others.

We are proud to partner with BAM Studios. O’Neill has been working with the BAM team for over 7 years to design, provide and install studio doors, windows and decorative acoustic wall panels in their state of the art post-production recording facility. Terry Abell of the O’Neill team personally installs all of the fabric panels for BAM. The project is extremely hands with very high precision and design on all levels. Everything in the BAM studio is custom and cut by hand for the final product. It is just all part of the experience to provide the very best for our clientele. See the studios for yourself with some fabulous visuals of Studios B and C, completed by the O’Neill team and read more about the success of BAM Studio’s Serious Sound.

Acoustic doors and windows are important noise-blocking assets for any application. In addition to industry-leading noise reduction capabilities, ours assure optimal alignment, fit and ease of operation.

Sound deadening material for walls like our fabric-wrapped acoustic panels are an inexpensive way to reduce noise and echo in your facility while simultaneously providing an attractive aesthetic.